A men’s wellness sports gala was held at Jumbo stadium in Mazowe on the first day of November and all the three participating wards under culture actions took part in a soccer tournament. It went a long way in spreading our three focus areas as more than 500 people attended the event. In regards sexual reproductive health partners, there were teams from the ministry of health and the Zimbabwe National Family planning Council who were in attendance offering HIV testing, STI screening and Condom distribution for attendees. Participants also got access to family planning information.

Key observations were that the men generally accept that GBV is a reality and is usually perpetrated by themselves. It is however worrying that some actually defend it for various reasons amongst them being the need to show authority and also not to negotiate for sexual intercourse and other areas they regard as the husband’s right or authority in the marriage.

It was also clear that some women actually defend the violence perpetrated on them by their partners thereby making it difficult for the men to grasp the ills of this mishap.

In general the men and women seemed cognizant of the impending threat of climate change and the inevitable chain reaction caused by its outcomes and were mostly agreeable to taking responsibility for their environment but reiterated the need for sustainability projects in order to better their chances with alternatives in terms of livelihoods.

Most men who attended and participated at the gala appreciated the negative side of child marriages and thanked the culture actions program for bringing awareness on the issue and becoming a beacon of hope in fighting it. However they noted the difficulties in ending it due to strong drivers such as poverty and early sexual activity by teens caused by lack of recreational and educational activities such as these sporting galas.

The Community change maker awards ceremony sparked a major interest among attendees as they sought to hear the stories behind those who were receiving awards. This enticed most of them to want to also walk the road of change which the awarded beneficiaries had walked ,a story of change as it was being called on the day. 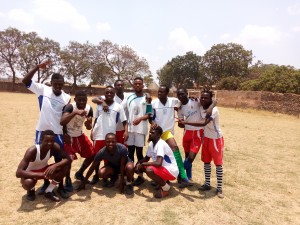