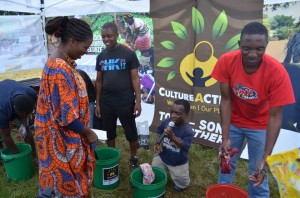 The laundry Café concept was launched at Heyshott Football Grounds in celebration of the International Women’s Day. The laundry café acted as a platform for women to share their insights, grievances and solutions to the GBV problem whilst showcasing their gender role. The event was supported by the District administration, Traditional leader Chief Makope, Ministry of Justice Legal and Parliamentary Affairs, Ministry of Women and Youth Affairs, Department of Social Services, Victim friendly Unit, Youth Advocates Zimbabwe and ZISAF

The women who participated in the laundry café showed a good understanding of the term GBV as they highlighted various forms of violence which include emotional, sexual, economical and physical violence. An emotive issue that was raised during the dialogues was the high levels of unemployment in adult women and girls which leads most women to depend heavily on the husband’s income who at most times are reported to be unwilling to spend. The need to avail income-generating projects for women and youth in the communities was identified as having a sustainable change in fighting poverty which was attributed to most GBV incidences in the District

The laundry café demystified gender roles in the community as young men and boys also did their laundry highlighting the need for shared responsibilities in the household. Some men showed scepticism towards doing laundry  in public as it is predominantly a role reserved for women showing that there is much more work which needs to be done to advocate and sensitize the community of the importance of sharing roles in the homestead not overburdening another sex in favour of another. In the men’s laundry cafe dialogue session, men unanimously agreed that most women had a sharp tongue which was a serious form of verbal abuse that led most men into emotional stress and depression. Verbal abuse from women was also attributed to be the reason why some men to indulge in physical violence

The Ministry of Justice legal and parliamentary affairs representative allayed fears that were being raised by the men with regards to maintenance as she clearly highlighted that maintenance was not only applicable to women also to men but traditionally men had been hesitant to demand maintenance from a working partner due to fear of stigmatization from the community, as the men would be seen as abandoning traditional gender roles.

Individuals who suffer from physical impairment were also found to be most vulnerable to GBV as a participant during the laundry café attributed to being emotionally and physical abused by her able bodied partner and had previously suffered in silence a fate which he thinks most of his colleagues in the disabled community are facing.

The Laundry Café acted as a mirror to society exposing the different views man and women hold with regards to GBV with the effort of gaining renewed commitment from communities to respect and care for each other whilst naming and shaming bad practices that destroys our social fibre.